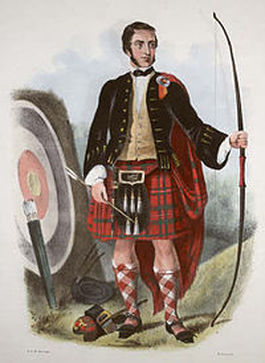 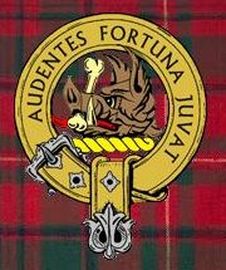 The early history of Clan MacKinnon is lost in the mists of time. However, it is generally accepted that the clan is descended from Loarn, one of the sons of King Erc who himself was founder of the ancient Irish kingdom of Dalriada. The tribe of Loarn occupied the northernmost districts of Dalriada. The lands included the area of modern Lorn, as well as the islands of Mull, Coll, and Tiree.

The history of the ancient kingdom of Dalriada was recorded in the early monasteries. These annalists tell of an almost constant struggle between the tribes of Dalriada for possession of the title Ard-Righ (“High King”). The two most powerful tribes, led by Loarn and Gabhran, were equally strong; neither of them was able to subdue the other so the High Kingship alternated between them. The long struggles between the tribes of Dalriada, however, considerably weakened the kingdom and in about 700 A.D. it fell to Viking raiders. For several hundred years nothing further is recorded about the tribe of Loarn, but it had not disappeared.

Finguine, founder of Clan MacKinnon, was a historical figure and a prominent warrior known to have lived during the last years of the 12th century. Finguine, the grandson of Aibertach of Lorn, gave the clan its Gaelic designation: Mac Fhionghuin (“Son of Fingon”). Eventually the name was anglicized to “MacKinnon” by a MacKinnon chief during the 18th century; an occurrence which came relatively late in clan history.

As the Kingdom of the Isles developed into the Lordship of the Isles during the latter part of the first millennium, there was a flowering of Gaelic arts, literature, building, and trade. Clan MacKinnon was active in all aspects of this growing and uniquely Gaelic culture. For many hundreds of years the MacKinnons held offices of importance in both the military and civil administrations of the Isles. A MacKinnon chief was the marshal of the island fleet that transported Robert Bruce and his army during the start of the campaign that ended at Bannockburn in 1314. MacKinnon chiefs were respected members of the Council of the Isles, Brehon judges, and, for a time, Masters of the Household for the Lords of the Isles. From about 1357 until 1498 the MacKinnon clan supplied the abbots and priors for the monastery on Iona. Under the Lordship of the Isles, the MacKinnons obtained the lands of Strath on Skye, a farm called Sliddery on the island of Arran, and consolidated their hold on Mishnish, a district on the north of the island of Mull.

After the fall of the Lordship of the Isles (c.1493) the MacKinnons, along with the other Island clans struggled for some 50 years to re-established it. The Islanders, however, could not succeed against the growing power of the Scottish kings, and the spirit and unity of the ancient Lordship was lost. The Scots kings, however, were not strong enough to impose their will in the west. With no governing authority for more than 100 years, the Island clans struggled individually for survival.

It was during the civil wars that enveloped Scotland, Ireland, and England in the 1640s that first saw the MacKinnons support the Stewart kings. They marched with the royalist general, Montrose, fully participating in his victories. Although King Charles I was eventually executed, the MacKinnons remained loyal to the Stewart cause by supporting the restoration of his son, Charles II.

When the Stewarts again lost the throne of England during the Glorious Revolution, the MacKinnons marched under Bonnie Dundee in 1689 to save the throne of Scotland for them.

The Stuart cause gained much support in 1707 with the passage of the unpopular Act of Union that forged England and Scotland into one country. Clan MacKinnon was out in all three of the attempts to restore Scotland’s sovereignty in 1715, 1719, and 1745.

The period following the ill-fated Jacobite risings saw the once prosperous Island clan reduced to poverty. Unable to pay all of the debts for which he was responsible, Charles, the penultimate MacKinnon chief, sold the last of his patrimony in 1791. The clan, which was now living on land that was owned by others, lost much of its leadership to emigration. Many of the ordinary clans folk, who had the means to leave their traditional homes, soon followed and also went abroad.

The brutal but well-known clearing of the Highlands to make room for the more profitable sheep saw the MacKinnons, after more than 1000 years in the Hebrides, scattered around the globe. From Arran between 1829 and 1843, the majority of the displaced MacKinnons fled to relatives in Skye or Mull, but a few found new homes in Lower Canada. Then between 1843 and 1853 many of the clans men and women living in the ancient MacKinnon townships on Skye and Mull lost their homes and were forced to emigrate to Canada, Australia, and the United States.